All-star lacrosse goalie and fullback for the Yale Bulldogs, Eric Wenzel, started a late-night ritual with his fraternity brothers involving a sandwich and a lot of hot sauce.

Eric’s late night eats consisted of a hoagie sandwich made with a hoagie bun, tomatoes, fried chicken, lettuce, provolone cheese, and a special sauce that gave the sandwich a name of its own. Fellow Yalies began ordering Eric’s late-night ritual which evolved into a legendary sandwich at New Haven restaurant, Alpha Delta Pizza, where they added the coveted concoction to their menu as The Wenzel.

Wenzel’s late night ritual had an abrupt pause in 2003 when he was critically injured in a car wreck. As Eric healed and prevailed, the Wenzel’s sandwich became a hot commodity to Yalies and fellow patrons making the Wenzel Sandwich Alpha Delta Pizza’s top seller.

Now the legendary man is bottling his signature sauce for you to make a spicy and delicious Wenzel Sandwich anytime, anywhere. It is also great on pizza, wings, burgers and any late night or college tailgate eats that you want “Wenzel-fied!”

When you purchase Wenzel Sauce you are supporting the Bulldogs Care Foundation – a foundation that honors Eric’s four fallen teammates and seeks to support disadvantaged youth.

Get a bottle of Wenzel Sauce and all your eats can be “wenzel-fied!”
Make every meal legendary wenzelsauce.com 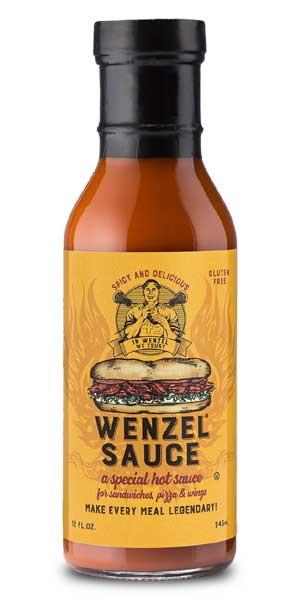